A brief outline of the technique of traditional Japanese prints


The technically and qua perfection traditional Japanese woodblock prints are unequalled. The high level is the result of great skill, careful selection of special tools and materials, and of a unique close cooperation of an artist, a publisher and carvers and printers.


First the artist made a number of sketches by using a brush and sumi (a black pigment), and then selected the best one, usually in consultation with the publisher.

Next the artist or a specially trained ‘copyist’ made an accurate drawing (hanshita-e) of the chosen sketch, on very thin paper. Patterns of clothes, details of the background, etc., usually were worked out by the artist’s pupils or by the ‘copyist’ and his assistants, after instructions by the artist. The artist’s signature, the publisher’s trademark, a title, or the names of portrayed persons, all this was also added to the hanshita-e. Further two guide marks or kento were added in sumi, as these were needed later in the process to register a complete set of blocks correctly. One kento was an L-shaped mark in one of the corners and the other was a straight-lined mark along the longest adjacent side.

The hanshita-e was pasted face down on a block, preferably cherry. The block was 3 to 3.5 centimetres thick, sawn with the grain and carefully dried and smoothed.

The black image on the thin paper now was visible mirror wise, through the back of the paper. The carver (not engraver!) carved with the tip of a special knife along all the black lines and black areas, and thereupon all the white parts were deepened by using chisels and gouges. So, the hanshita-e was entirely wasted in the process, while the kento and the parts to be printed were left in high relief.

Each Japanese print is unique

When the first block was finished, ten to twenty black-and-white impressions were made and here also the kento were printed. On these sheets the colours were indicated. As a rule for each colour one sheet was used. A combination of two colours on one sheet was only used when the colour areas were far enough apart. Each sheet of the set was pasted face down on a block and after carving, chiselling and gouging, each block showed its specific colour area and the two kento in high relief.

After the accomplishment of the complete set needed for full-colour printing, the first edition was being prepared, as a rule consisting of one hundred and fifty or two hundred impressions. The impressions were not made by using a printing press. Each impression was made by hand, using a circular pad called a baren. After sumi or colour had been applied to a block, the printer laid down a sheet of moistened paper on it and then made the impression by rubbing the back of the paper with the baren. The kento were not printed in the final process as the guide marks just served to register the paper correctly, at each printing. The paper was laid down with one corner into the inner corner of the L-shaped kento and with the longest adjacent side precisely against the straight-lined kento.

The paint (not ink!) used for traditional Japanese prints was always water-based and made from a range of vegetable (organic) and mineral pigments. Some aniline colours and Prussian blue were imported from Europe. The paint was mixed on the block with some rice-starch paste for more adhesion and to improve the uniformity of colour.

For deluxe editions, which were often privately commissioned by select groups of poets, connoisseurs, literati and kabuki fans, various refined printing techniques were used, often combined with expensive pigments such as mica, gofun (seashell powder) and silver-colour and gold-colour metal powders. The techniques included embossing or blindprinting (transferring relief from a block to the paper), burnishing (giving a colour shine by polishing its surface) and bokashi. The last is the collective term for a variety of gradation techniques, giving colours a more lively appearance. Best known is the bokashi that is often applied in the landscape prints of Hokusai and Hiroshige. For this type of gradation a damp broad brush is used, that is loaded with colour at one end. The brush is moved from left to right, or the other way round, across a dampened area of a block, which results in a gentle vertical gradation of the colour.

As bokashi was always applied manually and in each individual impression, no two impressions of a print with gradation are identical. 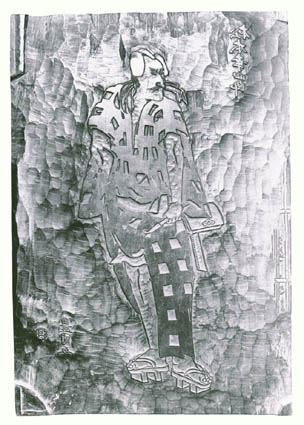 Woodblock with the two kento at left.

By courtesy of Richard Kruml, London. 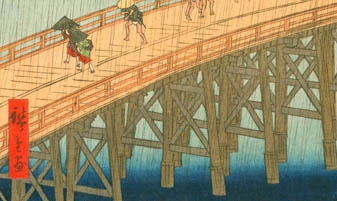 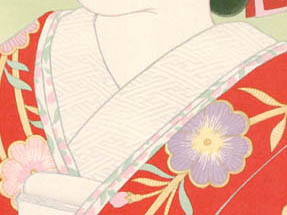