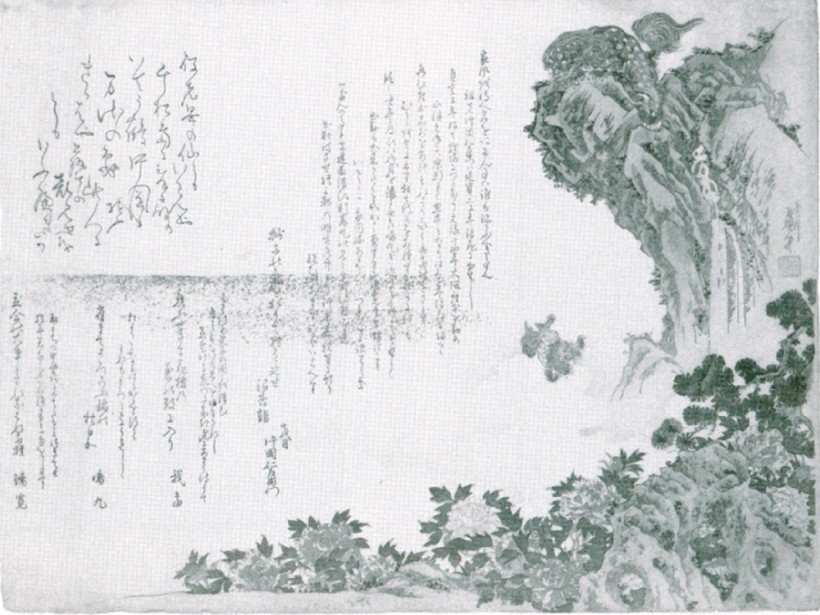 Subject: A lion-dog (karashishi) pushes its cub into a ravine to test its strength and perseverance. A surimono.

Lion-dogs are often found with flowering tree peonies, symbolising wealth, prosperity, and courage. The scene is a traditional one. After having thrown the young lion-dog into a ravine, the parents observe whether and how their cub manages to find its way back to the top of the cliff. Often the theme refers to or commemorates a young actor’s debut or an important turning point in his career.

This print much resembles an unsigned surimono that was published in 1788 to celebrate the actor Asao Kunigorō II’s change of name to become Kataoka Nizaemon VII.1 More than forty years later, the actor, by then the leading star of the Kataoka line, commissioned Sadamasu to design a new version.

The subject matter of Sadamasu’s surimono most likely concerns a special event in the career of either Shimamaru or Gatō. The first started a career as an actor in the 1810s and was as a troupe leader at two theatres in 1828 and 1829. The last started acting in 1831 and, after the young actor had become a disciple of Nizaemon VII, he took the name Gatō in the spring of 1833.

More details can only be given after translation of the poems, for which a larger illustration or the original print is needed.