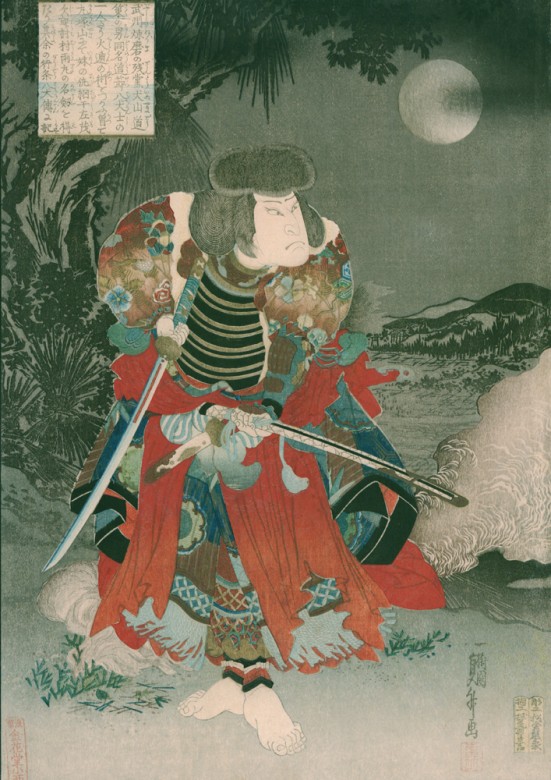 In 1834 a small number of surimono-style prints with scenes based on stories from the epic novel Nansō Satomi Hakkenden (The Tale of the Eight Loyal Dogs of the House of Satomi) were published in Osaka. The prints were designed by the leading artists Hokuei and

Shigeharu, individually, and showed popular actors as Hakkenden heroes. The prints are published in two sets and, despite the portrayal of actors, not related to an actual performance. The scenes are mitate, for unknown reasons being in advance of the first performance of the dramatized version of the ‘Hakkenden Tale’, which took place 1/1836 at the Naka Theatre.

As is the case with the prints of the two sets, also Sadamasu’s print is a mitate of a Hakkenden scene. The actor Nakamura Shikan II returned from Edo 11/1833, but the style of the artist’s signature and the type of Tenmaya Kihei’s publisher’s seal indicate that this print was published not until the autumn of 1835.

Further, the printer’s name is replaced with that of Horio Kamejirō. He was not only a printer but also a publisher (identical with Daikame?) and, as far as we know, he was active after the Tenpō Reform, starting not later than 10/1847. This might indicate a publishing date  between mid 1847 and 5/1848, the last being the date on which Sadamasu changed his name to Kunimasu. Considering that date, we should bear in mind that In the first eight to nine years after the Tenpō Reform it was forbidden to mention the names of actors on prints. However, in this case the name of Nakamura Shikan II originally was not included in the design. The reason for producing the later printing is unknown.