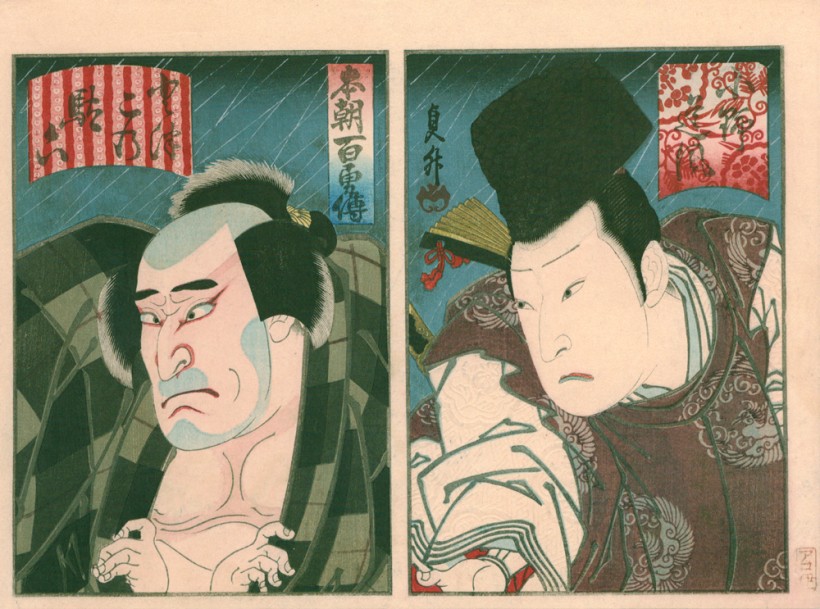 Title: Honchō hyakuyūden (A hundred tales of bravery of our country).

The present koban diptych and the following one (both uncut, so actually chūban) belong to the prints published in the first year of the resumed print production. More than once they were found together with other koban of this period, bound in albums by contemporary collectors. Among a variety of seals known from koban prints of that date, is also the seal Akoi that is stamped on Sadamasu’s prints in question. Until now the seal is only seen on prints published late 1847 and early 1848.

Quite a few of the actors’ roles shown on prints of this period are related to kabuki plays that were actually performed at the date of the print publication, but also many are mitate, that is, the portrayals are fictitious. Concerning this koban diptych and the next one, three of the four portrayals can be linked with performances dating back several years. Arashi Rikan III and Kataoka Ichizō I played their roles Ono no Tōfō and Daroku in Ono no Tōfū aoyagi suzuri at the Ōnishi Theatre, 4/1839, and one month earlier, at the same theatre, Kataoka Ichizō I rendered Sato Masakiyo in Hachijin shugo no honjō. A performance with Bandō Jutarō II (Ichikawa Ebijūrō IV) as Gotobei, a role appearing in Yoshitsune koshigoe jō, is not found in the many sources consulted.

Not only at least three of the four roles and the related performances link the two koban diptychs with Sadamasu’s prints that are published before the beginning of the Tenpō Reforms, but also the style, the artist’s rich feeling for colour and deluxe printing, the style of his signature and the use of the bat-shaped seal do so. In addition to this it is interesting to note that the faces of Rikan III and Ichizō I (as Daroku) both in detail and size are identical to their faces shown on Sadamasu’s chūban published 8/1839.

Most likely the koban diptychs were used to indicate that the artist had taken up his activities as a print designer, after the period of five years in which the publication of prints was strictly forbidden. Not long after having re-introduced the name Sadamasu to the kabuki fans, the artist designed a number of prints on which he announced changing his name to Kunimasu.

Until now, as a rule both koban diptychs are attributed to Sadamasu II. The reason for this is a performance of Ono no Tōfū aoyagi suzuri that has taken place at the Wakadayū Theatre, 7/1848, starring Arashi Rikan III as Ono no Tōfō, and Kataoka Ichizō I as Daroku. Related to this performance Sadamasu depicted the two on a chūban diptych (see overview) and signed it with his new name Kunimasu, which he had begun to use on prints published 5/1848. As a result of this, the koban diptych discussed here is usually attributed to Sadamasu II, and consequently also the other koban diptych. However, the artistic elements of these prints are clearly different from the ones seen in the prints that are definitely by Sadamasu II, all of which are published in 1849. Moreover, it is hard to believe that one of Sadamasu’s pupils would start using the name of his master in the seventh month of 1848, since around the same time the master himself was still announcing on his prints that Sadamasu changed his name to Kunimasu. The adoption of the name Sadamasu II must have taken place at a later date, sometime between the ninth or tenth month of 1848 and the seventh month of 1849. Consequently, and based on the other details mentioned, the koban diptychs erroneously are attributed to Sadamasu II.

See also the next print.