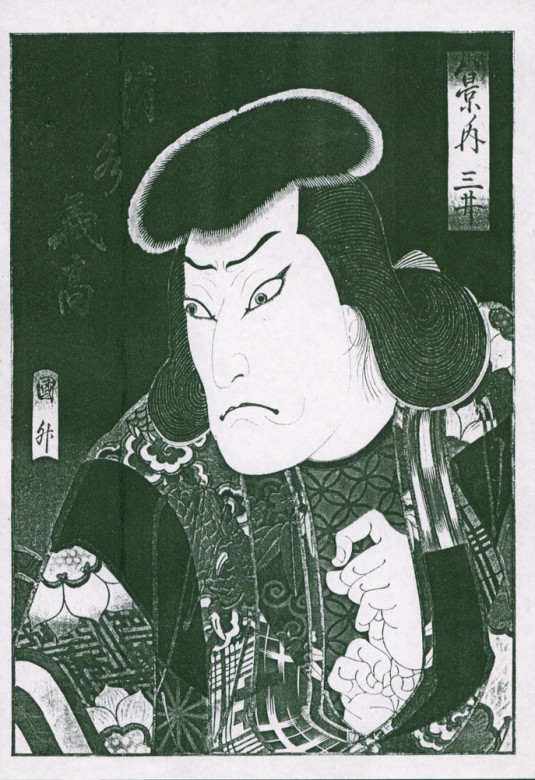 After the actor’s last performance, which took place 1/1849 at the Kado Theatre, he left Osaka for a trip along the Tōkaidō, setting off for Edo. Here he is depicted as Shimizu Yoshitaka, in a mitate referring to his journey. The role is chosen for the appropriate title of the play in which it appears: Ume no haru gojūsantsugi, ‘Plums in spring and the fifty-three post-stations’. The plum, ume, is also pronounced bai and refers to Baikō, which is both the actor’s

haigō (name for signing poetry) and one of his stage names (Baikō III). The fifty-three post-stations are the well-known stopping-places along the Tōkaidō, the road connecting Edo with Kyoto and here also the route the actor had chosen for his journey.

During his journey Ōkawa Hashizō fell ill. He died on the 24th day of the fourth month, in the town of Kakegawa on the Tōkaidō. On the clothing shown on the print appear four lotus flowers, two being pale blue, symbolizing the actor’s death in the fourth month of the year. The title of the print refers to Ōmi hakkei, the famous traditional collection of eight views of Lake Ōmi. The subtitle of the portrayal represents the fourth of these famous views. It reads Mii (formally: Mii no banshō, ‘The Evening Bell at the Mii Temple), which again is a reference to the actor’s death and the month of his decease.