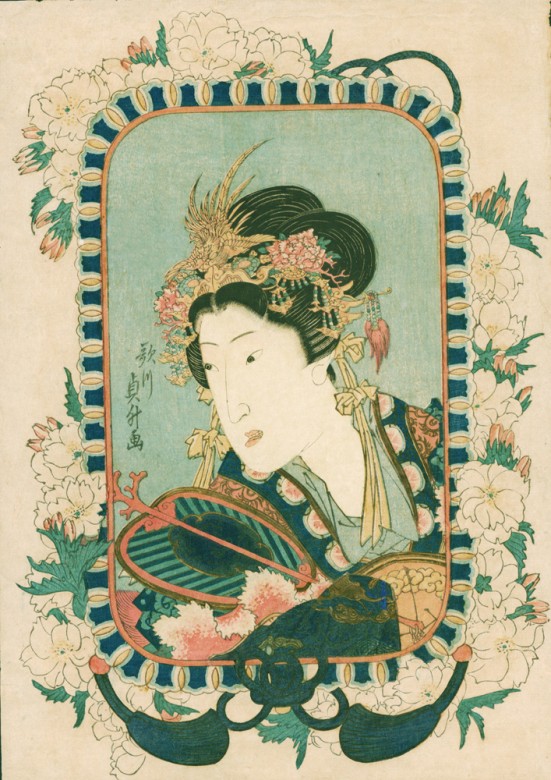 Subject: A woman dressed as a Chinese beauty, depicted on a pocket-mirror decorated with cherry blossoms all around.

The handwriting of the signature indicates a date in the early 1830s.

During his stay in Edo, as a pupil of Utagawa Kunisada, Sadamasu might have seen some prints with portraits of Chinese beauties, including the one of Yang Kuei-Fei in Keisai Eisen’s booklet Nishiki no fukuro, which was published 1828.1 Anyway, the bookplate in question bears much resemblance to the bust-portrait designed by Sadamasu. Apart from this, the Utagawa-style faces shown in his teacher’s prints of the 1820s and early 1830s, evidently have influenced this portrait by Sadamasu.2

Also we should mention here that the Osaka artist Hokuei designed a print depicting the actor Iwai Shijaku I as the Chinese beauty Neiwanjo, shown in a circular mirror. The print is related to a performance of Shimameguri tsuki no yumihari at the Naka Theatre, 9/1833.3 The coiffure, hair-ornament, fan and dress on this print, have a lot in common with those on Sadamasu’s print, but Shijaku’s arched nose and the typical shape of his mouth are quite different from the nose and mouth drawn here by Sadamasu.

In the case of an actor print not only the actor’s name or penname on the print and/or his features may identify him, but also his crest or other characteristic mark could be of much help. However, such details are fully absent here.

Further, the cherry blossoms on Sadamasu’s print refer to the first months of the year rather than to the ninth month, in which the aforementioned performance took place.

So, the present print most likely is a portrait of a bijin and not an idealized one of Iwai Shijaku I or other actor playing a female part. It seems to predate Hokuei’s portrait of Shijaku I playing the role of Neiwanjo.

1. In the collection of the Art Institute of Chicago.